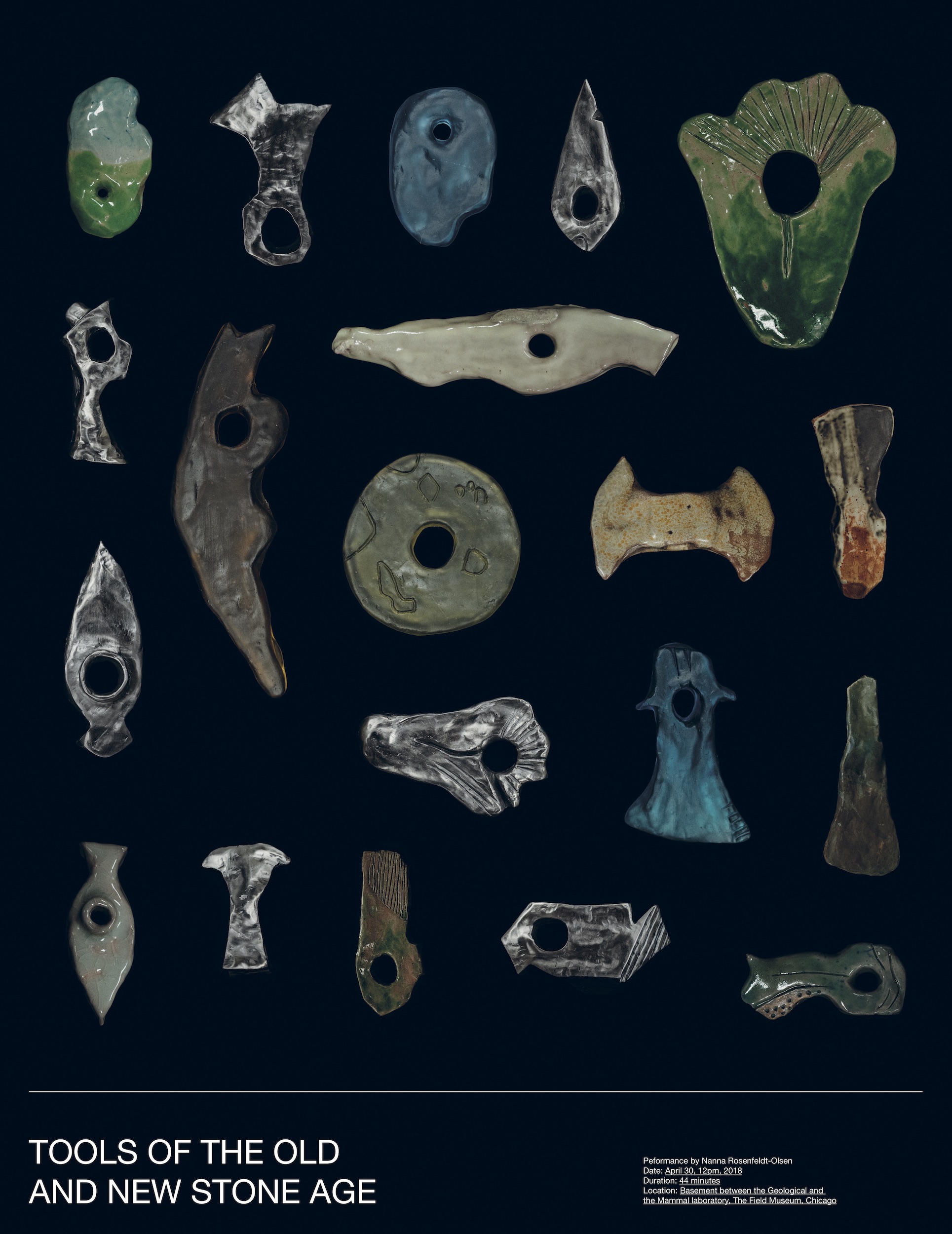 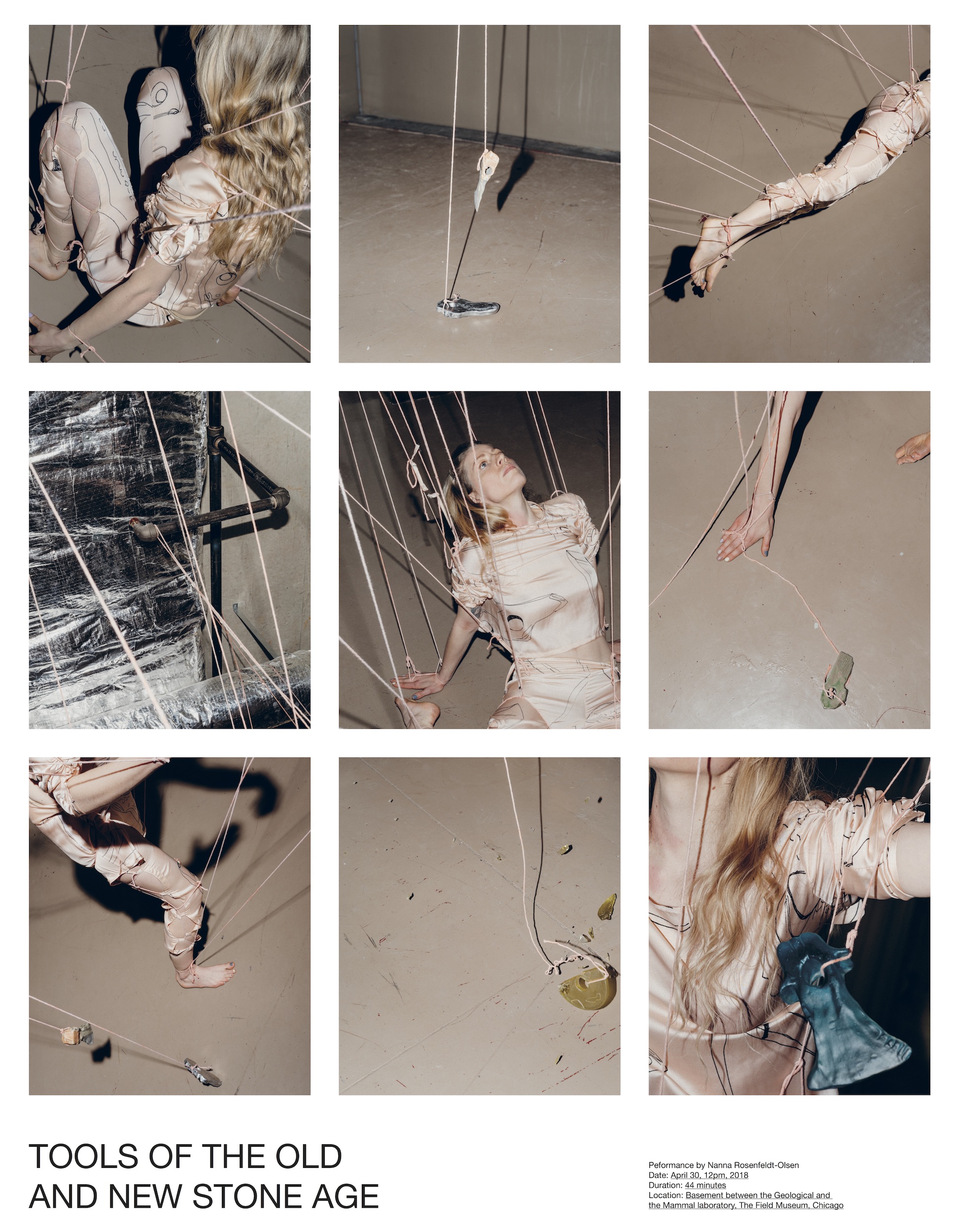 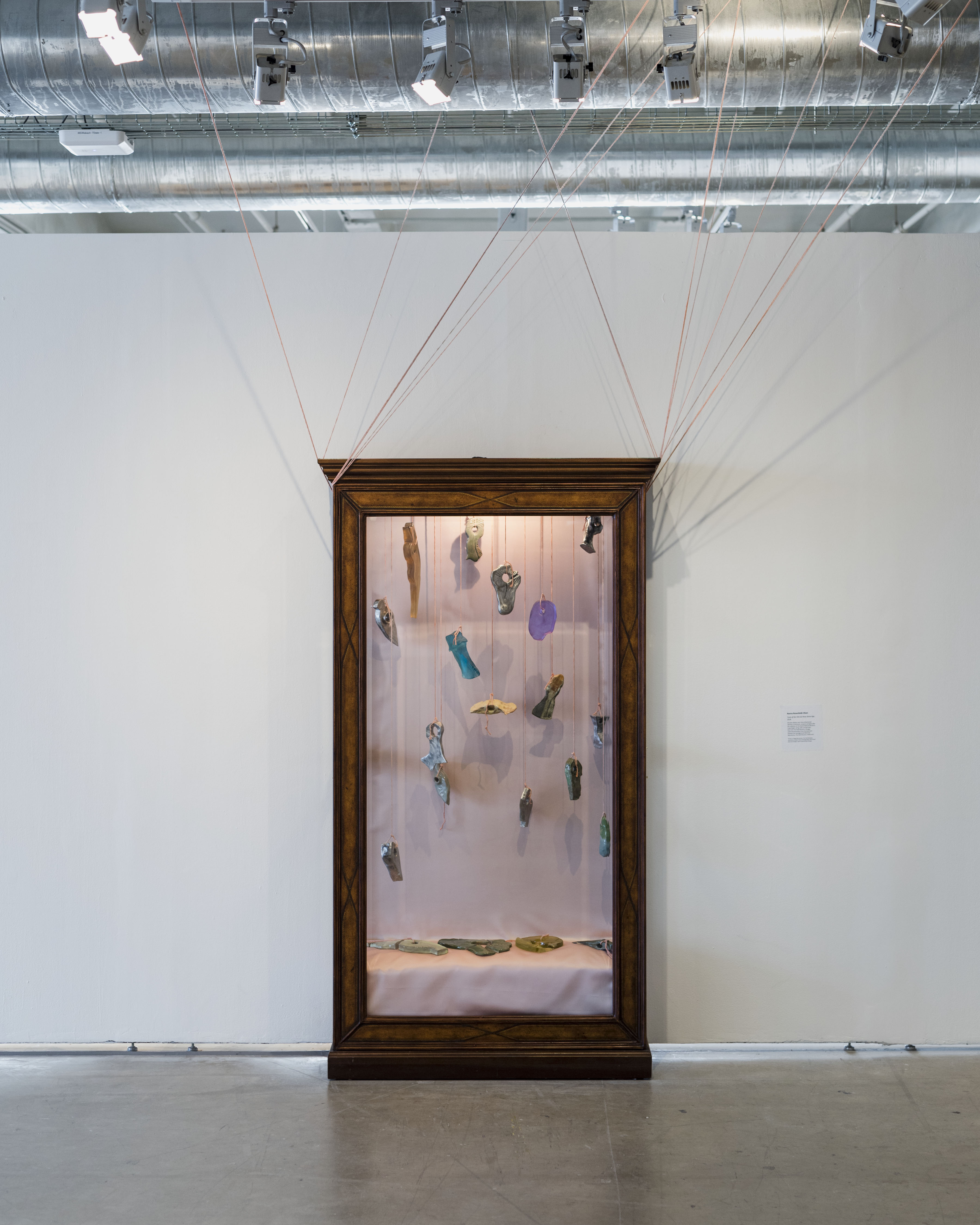 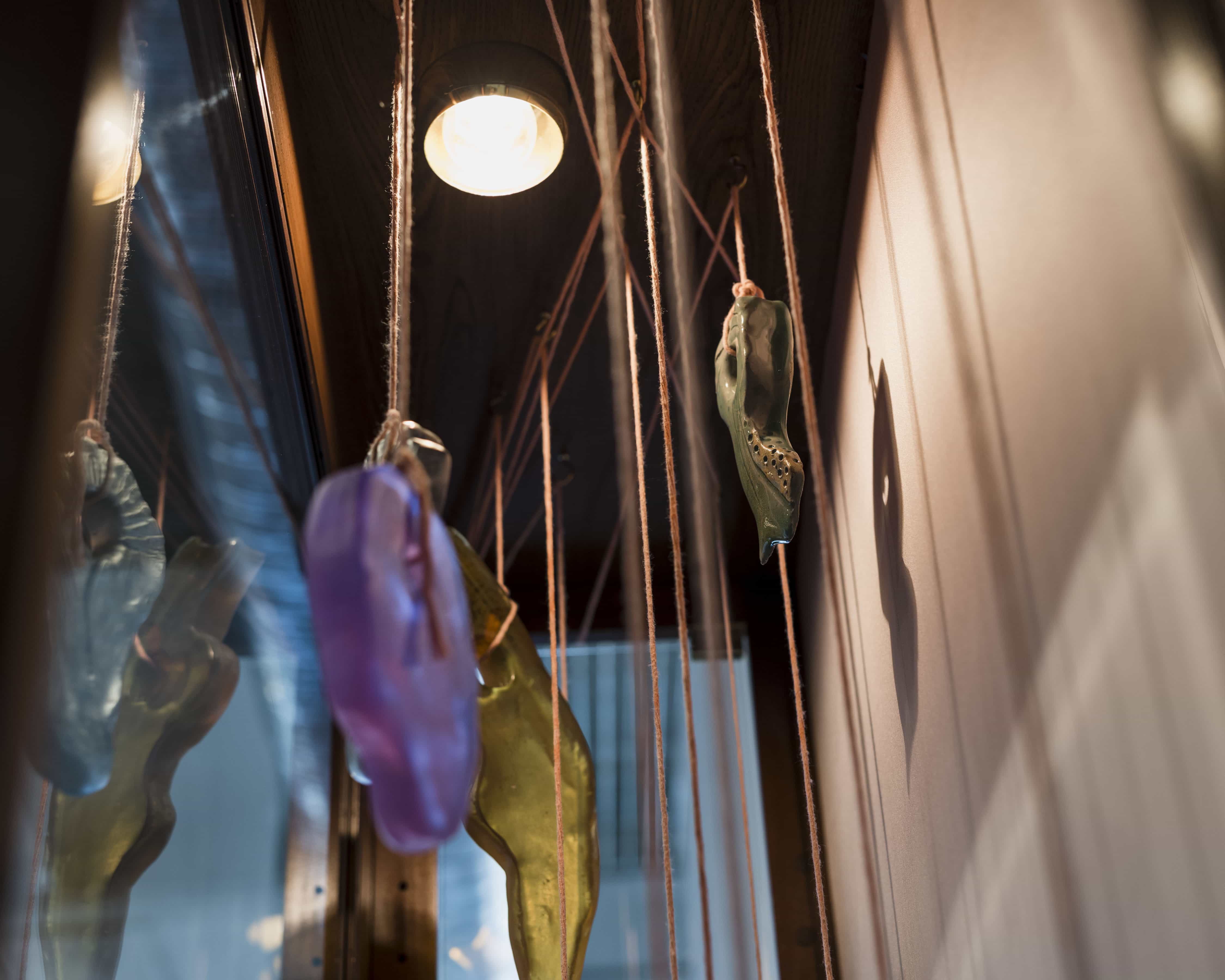 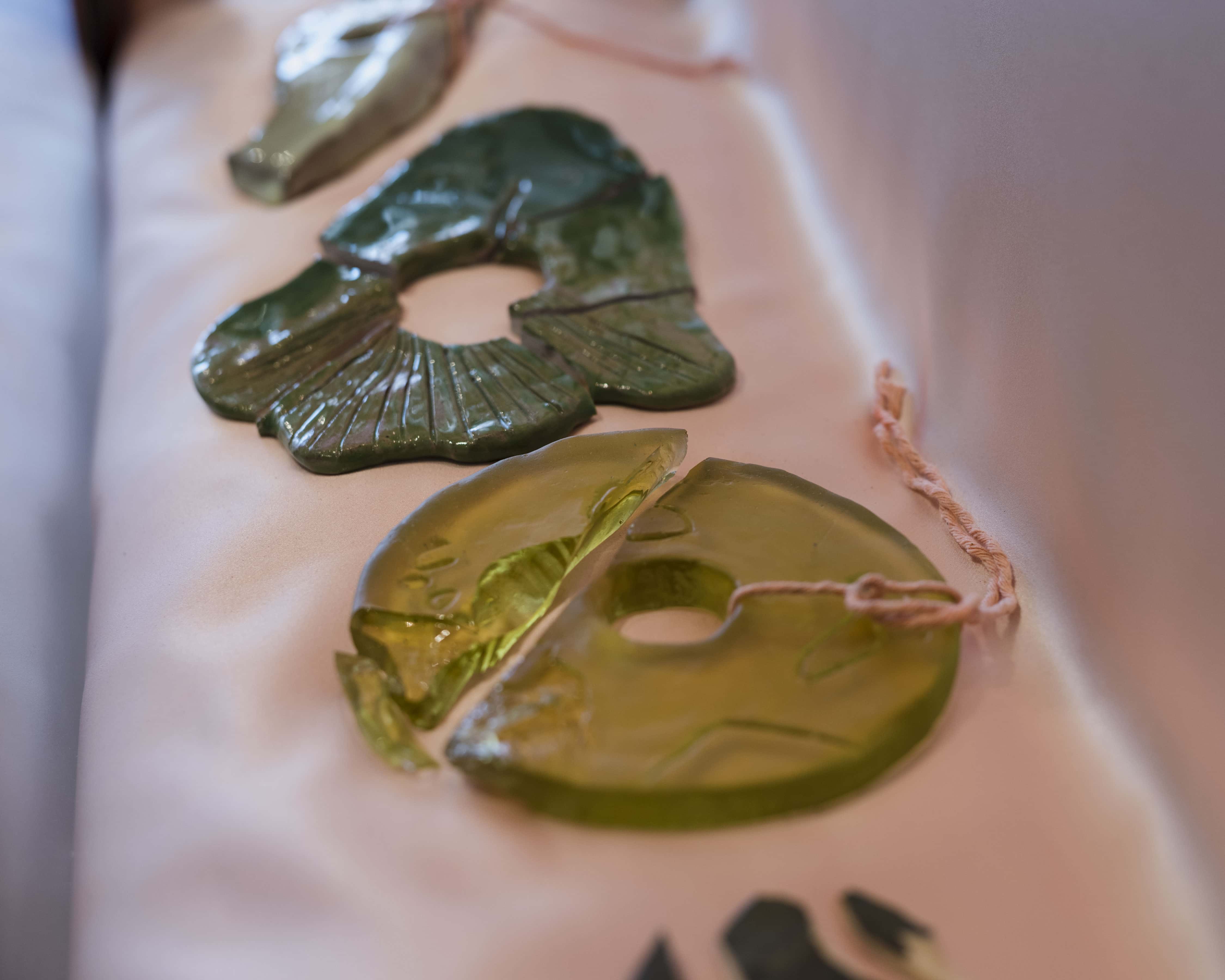 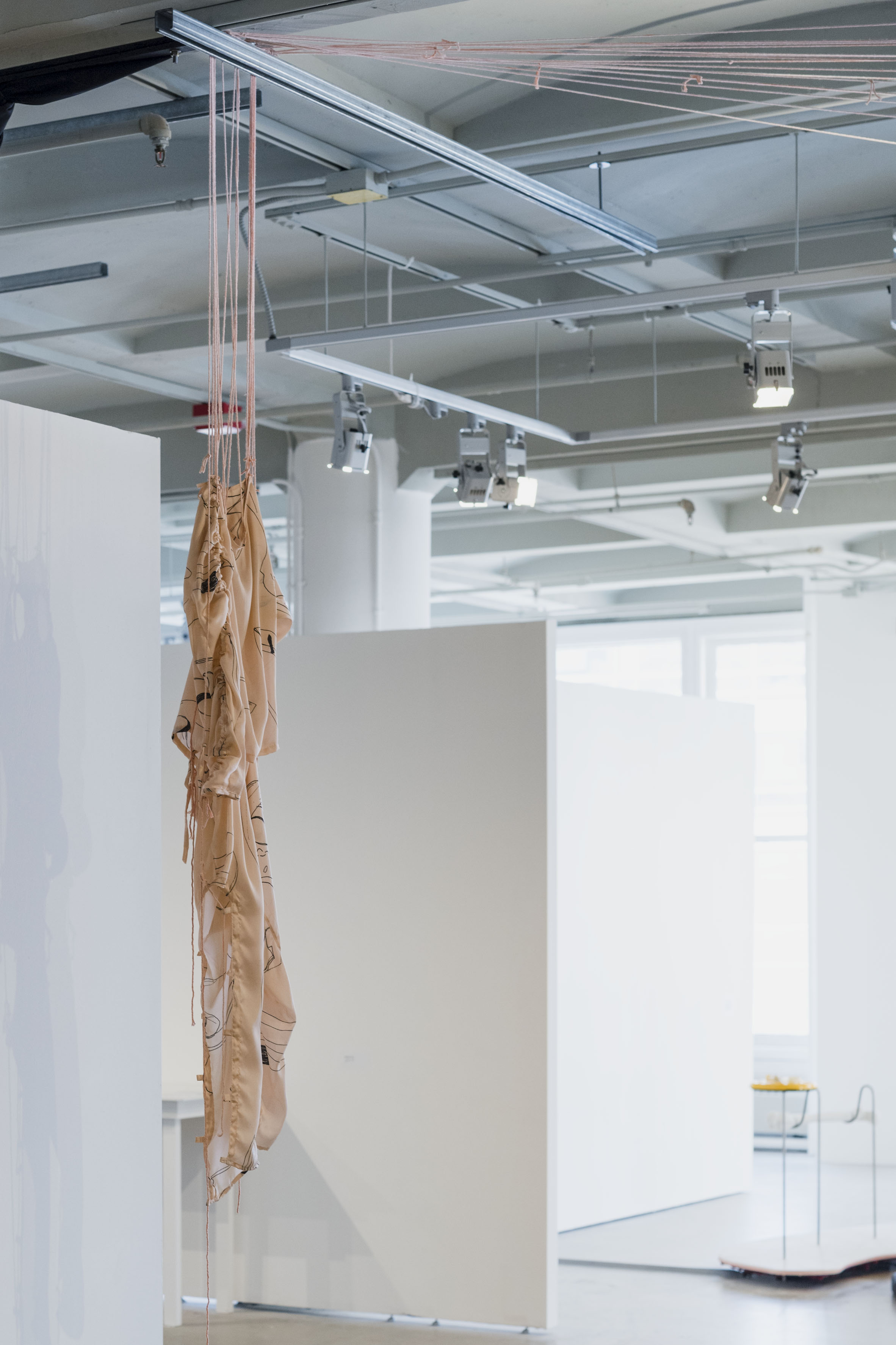 Three dimensional sketches in aluminum, ceramics and glass after the collection of The Danish National Museum, Copenhagen; string, satin, printed satin, dust from The Field Museum, Chicago; audio documentation from the basement between the Geological and Mammal laboratories, Field Museum, 44:00 min.

“Tools of the Old and New Stone Age” began with thirteen sketches of Neolithic flint axes from the collection of the National Museum of Denmark. These sketches were made under self-imposed restrictions, imitating the average time viewers spent in front of these stone tools and embracing the disruption of the display; impressions of the objects rather than accurate representations.

I translated these drawings into three-dimensional clay forms, further abstracting the forms of the original objects. These objects were then transmuted into glass, aluminum and ceramics. These material transformations suggest the trajectory of human technological development, yet undermine the teleological function of the axe. Each of these transformations also has significant implications for how the objects make themselves known to our senses.

These objects where then animated through a choreographed performance, staged in a restricted-access area of Chicago’s Field Museum of Natural History, off limits to any audience members. Instead of manipulating the tools directly, the objects are suspended from the exposed architectural infrastructure of the museum using dyed cotton ropes that also complete a custom garment, forming a symbiotic system and tethering the objects to my body at various points. Throughout the performance I respond to the objects, ritualizing their original use. In turn the objects respond to my actions and as the strings are untied, fall to the ground. Some remain whole. Others take on a new, fragmented form.

Documents of this performance are incorporated into a gallery installation for exhibition. The tools — ceramic, glass, aluminum — are confined to a display case like their ancestors in the Danish Museum. The fragments rest on repurposed fabric, while the unbroken objects are suspended from the dyed ropes once more. These ropes span the width of a narrow gallery, using the built environment to form new architectural elements, counterbalanced by the garment that hangs opposite the display case. Faint sounds of creaking rope and falling objects, the only record of the performance in its entirety, emanate from the cabinet of curiosity.